I’ve been putting this post off for far too long.

Ever since we were given the tiny snippet of the latest Hunger Games film through the Capitol’s TV broadcast way back in June 2014, I’ve been preventing these words from spilling out into a blog post. But I can’t wait any longer and we’ve gained so much more info since then that I can’t help but type these words:
THE MOCKINGJAY IS NEARLY HERE AND IT LOOKS EPIC!

If you don’t know what I’m referring to here then I’ll assume you’ve been living under a rock. To help you I’m going to give you all the deets you nee 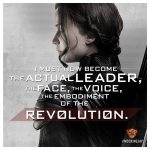 d because you have to be enlightened on this vital topic.
And for everyone that does know what I’m talking about, let’s take this moment to revel in our excitement and squeal and pray for November to get here sooner while we read this post!

It all began in June, 2014. President Snow uploaded his sinister broadcast on Capitol TV with Peeta at his side *cue shock horror and gasps*. He’s telling us about the importance of the Capitol, and how if you fight against them you’re biting the hand that feeds you. But all the while we’re looking at Peeta, unsure as to whether he’s hurt and wondering how he can be so passive at the evil Snow’s side. The trailer ends dramatically with the Capitol’s motto that sends shivers up my spine – “Panem today, panem tomorrow, panem forever”.

Flash forward to July! We’re treated to another one of Snow’s broadcasts. Peeta and Joanna stand at his side, with vacant expressions and proud stances. Confusing much? Snow is clearly trying to keep the districts on his side (attempting to brainwash them as he must have with Peeta and Joanna), telling his viewers about the “stronger future” and “united” front of the Capitol. Only this time the broadcast gets hijacked! And who by? Beetee of course, tech expert and survivor of the last Hunger Games! Delivering just one simple message, he shares three important words with the districts watching: “The Mockingjay lives.” Katniss’ survival is now out in the open – meaning she can begin her role as the symbol of the Capitol’s resistance by coming out of hiding.

The two mini-trailers were great to watch, and much better than if we were given a standard movie trailer first. Through these videos not only were we given a taste of what was to come in November, it also served its purpose. The broadcasts actually felt like real broadcasts, if you know what I mean. Much like the people of the Capitol and the districts in the story, we were anxiously awaiting news from Snow, Peeta and Katniss and watched the screen with anticipation of what was to be revealed in the broadcasts. Pretty impressive if you ask me!

Then we didn’t have to wait long before the first teaser trailer was posted on the franchise’s YouTube account a few weeks later (below).

We get our first glimpse of the destruction within the districts, the ferocity of the Capitol’s army, the rebellion’s discussions (with the late Phillip Seymour Hoffman as former Gamesmaker Plutarch Heavensbee and Julianne Moore as President Alma Coin, the rebellion’s leader), Snow banning the Mockingjay symbol with serious consequences, and Katniss’ determination to help the falling districts.

And then we had the gruelling torturous wait for the first official trailer… ok it felt like forever to me! A month after the teaser trailer, we were given the first official trailer to compete with all trailers. It had everything the trailer needed: dramatic music, cameras slowly zooming in on characters with Katniss’ voiceover, cuts to black screens for dramatic effect, shots of weapons, shots of characters with dramatic music increasing, more shots of weapons, shots of using the weapons, shots of Katniss in her suit, shots of Katniss being emotional, shots of Peeta looking sassy and clean-cut, more shots of Katniss being emotional (“Or you will find another Mockingjay!!” *angry face*), shots of destruction, the iconic three-finger salute, and then a few explosions before we see the Mockingjay pin/logo and hear the iconic whistle of the franchise. So yeah, it had everything. I watched this trailer so many times on my phone, my laptop and even more times on my TV (which I recommend, it looks amazing on a big screen – you can almost kid yourself that it’s November and you’re in the cinema watching the film!).

The trailer really shows just how the plot has steered away from the actual Hunger Games and the arena, as the real battle against the Capitol and Snow begins. The film no longer takes part in the training rooms with the mentors before building up to the fight between the district tributes in the arena. It’s no longer about tributes trying to get sponsors or about trying to present yourself as a favourite in the television interviews with Caesar. Much like Katniss’ mourning of her district, we too must mourn the glamour behind the games – which distracted the Capitol from the true horror of the Games – and much like the people of the Capitol, we see the truth behind the Capitol’s ruling and the destructive chaos it is creating.

Audiences can expect a much more serious, political and violent film (if it is anything like the books) as the plot becomes more about Katniss’ feelings and doubts towards being the symbol of hope for the District’s future, finding her determination to save her family and friends from the horrors of President Snow, and fighting for Peeta’s safety while being confused by his role as the Capitol’s weapon and advocate for their plans.

As if we couldn’t be given any more info, a couple of weeks ago we were given a SECOND official trailer (below), showing Katniss’ return to her home of District 12, to make the rebellion more ‘personal to her’. We also get the chance to listen to Lorde’s song Yellow Flicker Beat, found on the soundtrack (I’ll get back to that later, don’t worry). Here we get an insight into the true danger of Snow and the Capitol, and we see Katniss’ strength as she walks through her destroyed district and then finds the white rose in her home – a warning from Snow that he is watching her. Disturbing stuff!

Wondering who all the new faces are in the trailers? Well in September we were also treated to pictures of the rebellion crew in their sleek black suits (designed by guess who? No, not me – and I’m not talking about the film’s costume designers either). Who could forget the photos which went viral on social media and caused a stir as we saw new characters like Cressida, and our favourite heroine Katniss with her trusty bow and arrows on her back. Take a look at the pics which give us an idea of what the characters will be fighting in – its assassin-style hints of the strategic fights that the gang will be involved in. I particularly like the wing grooves on the back of Katniss’ suit. 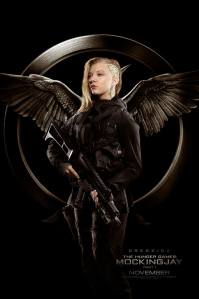 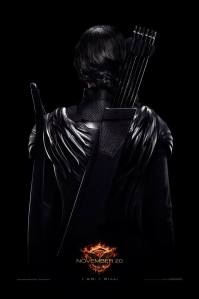 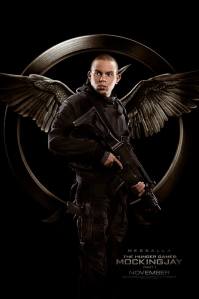 So who else is on the soundtrack?

Looking at the list, I’m looking forward to hearing Meltdown because of the mix of artists that are from a diverse range of genres, and This Is Not A Game by The Chemical Brothers ft Miguel. I’m actually really looking forward to that last one, I think it’s because the title of the song fits quite well with the film’s plot and again it’s an interesting partnership (I quite like Miguel’s songs too).

The Hunger Games has really given its fans a lot of visual material and audio to tide them over until the film’s release, and I’m sure with the gradual build-up that they have created, Mockingjay Part I is going to be the franchise’s biggest Box Office smash yet (you saw it here first!)

How excited are you for The Hunger Games: Mockingjay Part I?

– Keep your eyes on this page for new information and updates, as I will be adding updates as soon as it is released up until the film’s release! –